Having now owned the Osprey Manta AG 28 backpack for a little over a fortnight now, I feel prepared to share some of my initial perceptions. It’s been on two long hikes so far, totalling close to twenty-five miles of walking across mixed terrain and gradient. 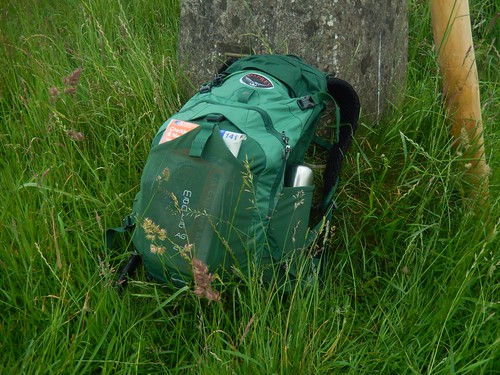 Further down the line, I like to think I’ll have further comments to make so, if you’re discovering this several months after the publishing date, I would encourage you to leave a comment and ask me how I’m getting on.

If you’re interested in the technical specification, you could download the User Manual or take a look at Cotswold Outdoor – where I purchased the pack and was informed that they stock it exclusively. It’s available in two sizes, depending on your height – at 6ft1in, the larger M/L size suited me well.

I should mention that the Manta AG is a men’s backpack, while there is the Mira AG for women. 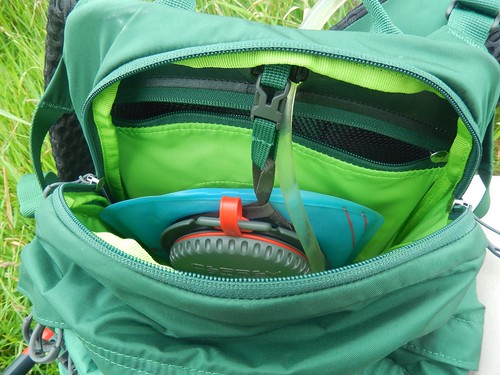 As you might expect from an Osprey pack; this one is packed with many of the common features from across their range. You do – as I was told – actually get all the benefits of a 30lt daypack. They call it the ’28’ because a separate compartment is provided for a hydration bladder (mine, in the photo, is 2.0lt), meaning you don’t immediately have to subtract storage space from your calculation.

You’ll notice a clip for keeping the hydration reservoir suspended – important, not only for access but also because it keeps the weight higher up, which is generally regarded as being a better way to carry any weight. 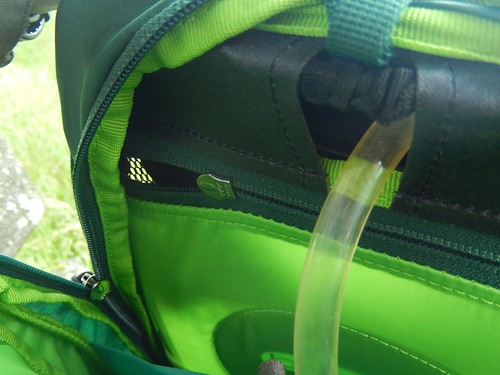 There’s an access point that allows the tube to snake out through the pack, down either shoulder strap (where elasticated loops can be found) and on to the included magnet, attached to the left of the sternum strap. That zip had been puzzling me, until I contacted Osprey on Twitter; who informed me that it’s not a ‘user feature’ and is strictly for the maintenance of the LightWire structure that forms of the ‘Anti-Gravity’ backpanel. I had hoped it might’ve been useful for ventilation and keeping your water cool but, that remains to be seen and the zip, having been fitted ‘inside-out’, remains very difficult to operate. 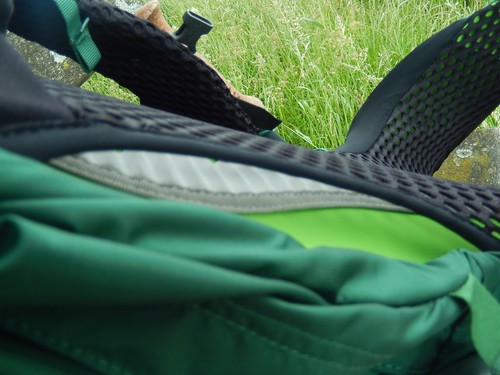 It carries a distinct curve to its form, which in turn, helps to transfer the load from your shoulders, away from your back and down to your hips – from which, the load is then taken on by your legs which, as I was also told, contain the largest muscles in the human body. That is what gives this pack its ‘AG’ or anti-gravity feel. Compared to my previous backpack, this has not impeded on any hill-climbing I have done so far and I’m still carrying the same load. 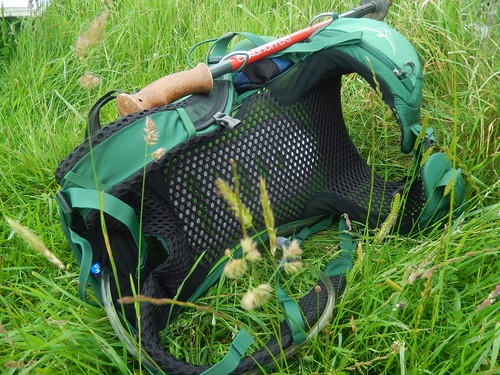 Above, you can see the suspended breathable mesh that allows air to flow behind your back. Many manufacturers will make claims as to how effective their own design is… From my initial perceptions of this Osprey Manta pack, I can confirm that the majority of my back has remained dry. It is only behind the hip belt, where the backpanel does make contact, that I have noticed perspiration and I think that’s very acceptable. 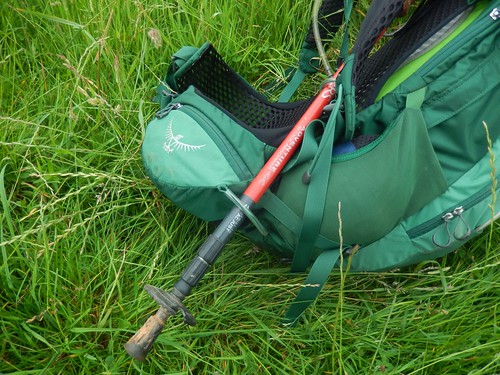 You may have noticed the walking pole in my previous photo and, while this pack does feature a common means of securing a pole to its rear, this model also has Osprey’s popular ‘Stow-on-the-go’ fastening system, so you can sheathe and retrieve your stick without having to remove your pack. 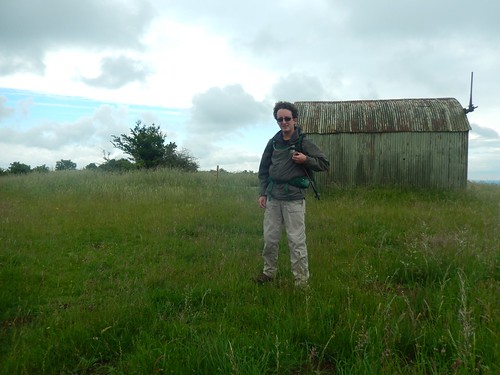 Compared with some other models, this has only the one set of loops on the left-hand side. But, these loops are large enough to retain a complete pair of walking poles.

Looking at the more common features of a day-walking backpack: 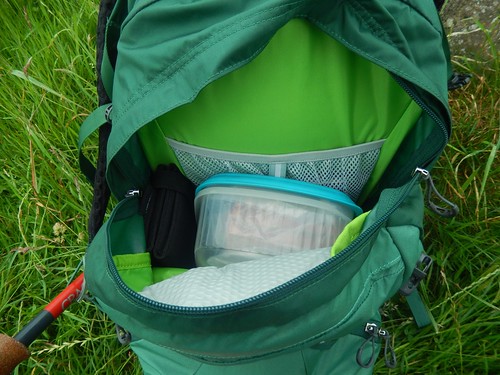 There’s a large storage pocket ahead of the hydration bladder and, compared to my 30lt Craghoppers backpack, this one is much deeper. I may not have illustrated this brilliantly since I was wearing the coat as I took the photo but, with a lunch box, sitting mat and coat rolled up inside, I still had plenty of room for a second box (used for baked goods when I’m leading walks) and then some. By which time, I would’ve already encountered a struggle in zipping up my older pack.

I believe that the separate compartment for the hydration bladder is a significant part in this. I haven’t decided how best to use those mesh pockets but they will comfortably take an Ordnance Survey map, when not required. I reckon I could save further space by using a ‘more efficient’ means of food storage, as opposed to the Tupperware box that’s been carting my lunches around since 1998. What do other walkers do? 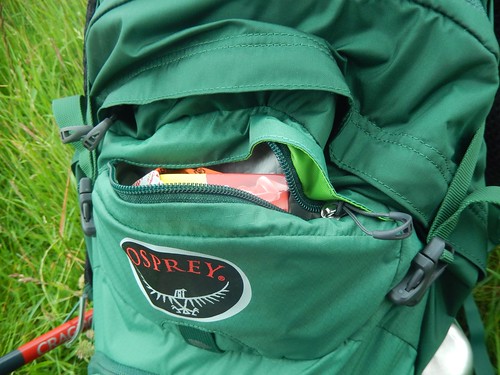 All of the large pockets in this pack are zipped. It does not have the lid-flap that you’ll find on the Talon and Exos packs but a narrow flap does fold over to prevent some water ingress.

High up, on the front, there’s a small pocket for sunglasses, a GPS device… Or, as you can see I pack in a mixture of assorted small items. Beneath that, is a loop for securing a cycling helmet. 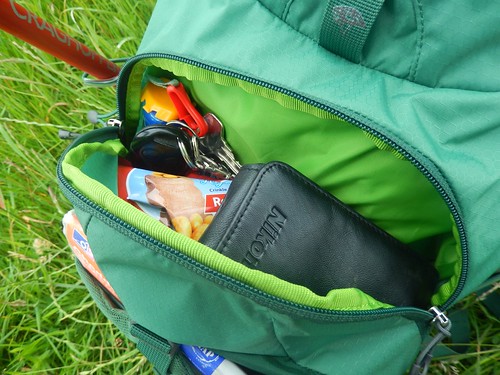 A slightly larger pocket lives on the front and towards the base, with a red clip available for holding your keys. I generally keep my suncream and insect repellent, here. You can also see my camera, some snacks and I know I have a hat and gloves beneath that. 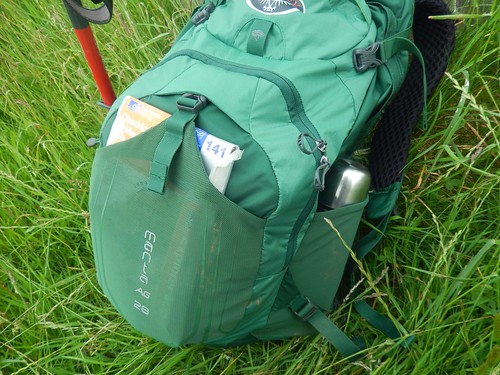 On the front, is a breathable mesh pocket; advertised as a convenient space in which to store a coat, when it’s too damp to be stowed away. Currently, I hold my OS map here, on days where it might be required infrequently.

Either side of that are two deep mesh pockets behind your hips. In the left, I have my pack-away waterproof over-trousers. On the right, I am now able to hold my flash here without risk of it falling out. These pockets are generously deep and can also be accessed from the rear of the pack.

You may also notice the handy loops attached to each and every zip, with a couple of adjustable straps across the top that held to secure the pack and compress a load. 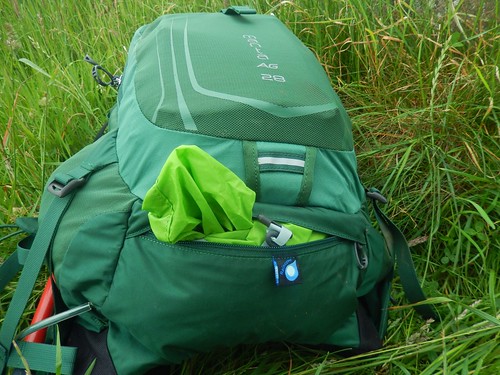 There’s just one more pocket to tell you about and that’s at the foot of the bag, where the included raincover is stored. This is a significant feature not only for its practical convenience but because some comparative models (like the Talon 33) do not include these and you would have to pay extra. It’s held in place with a toggle so that you can pull it out and wrap it over easily, then store away again without any hassle. When cleaning is needed, it can also be detached. 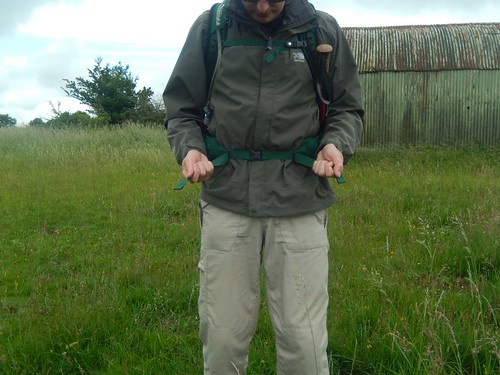 On the sternum strap, a magnet is enclosed for holding the bite valve on your hydration reservoir but this can only stay beside the left shoulder strap. There is no room for adjustment or manoeuvre. I have found it’s okay but, if you do desire a change, you could attach another magnet (usually supplied with your bladder) at any other point along the strap.

For comfort and a proper fit, there are adjustment straps both above and below the shoulder straps, while the hip belt itself is incredibly comfortable and, as you lift the pack in to position to wear it, you’ll find the arms attempt to ‘hug you’. It’s snug, soft and you’ll even find a pair of pockets for sweets, snacks, a compass and anything that might’ve previously added weight to your trousers.

I can adjust this pack to fit snugly without bearing any load on the tops of my shoulders. 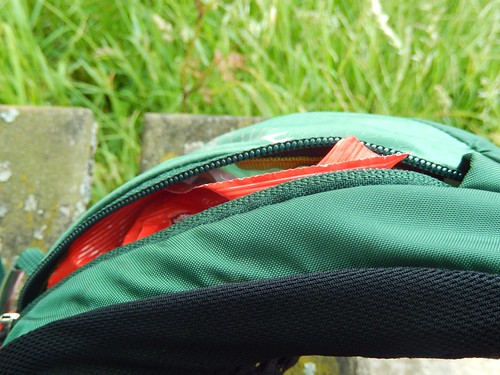 Some other daypacks that I looked at had mobile phone pockets but I don’t think it’s essential, unless you really need both hip-belt pockets along with the others.

Is the Manta 28 big enough for your needs?

Well, only you can decide that. There is a 36lt model although, it does not currently appear to be stocked at Cotswold Outdoor. I was initially intending to purchase a 40lt pack, before I decided to compare what I carry to what I actually need on a walk. 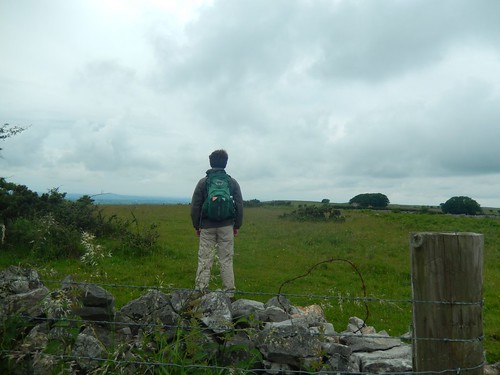 Without a doubt, I would happily recommend this to other day-hikers. Better yet, I’d encourage you to visit a store and try one for yourself and, even, to compare it, hands-on, with other backpacks. I went in with the intention of buying the Talon 33 pack… It was largely because of the AG and included raincover that I chose the Manta AG 28.

These photos were taken on the Mendip Hills, between Priddy and Westbury-sub-Mendip. Trig pillars make for useful tripods!

Thank you for reading and I do hope you find this useful.