This would be the decision-maker on whether or not my new-found return route to the car would register this figure-of-eight loop as a success. 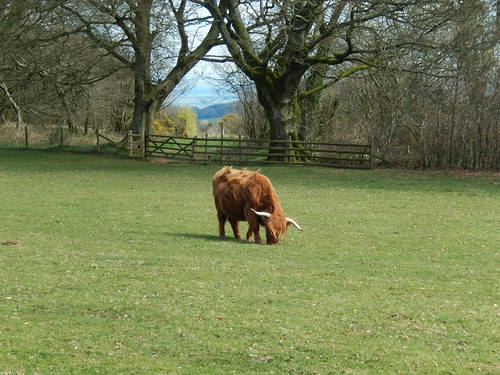 Or was I headed for another succession of broken stiles, ploughed fields and overgrown vegetation? Let’s go back to the southern half of the Quantock Hills! 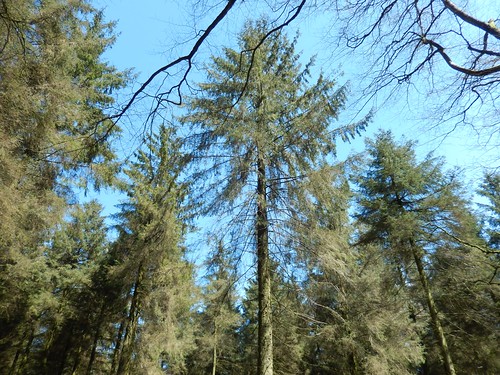 Post-lunch and from the woods of Muchcare, just east of Lydeard Hill; I briefly rejoined the track I had followed a good ninety-minutes earlier, ready to cross over and follow fields in the direction of Bishpool Farm. 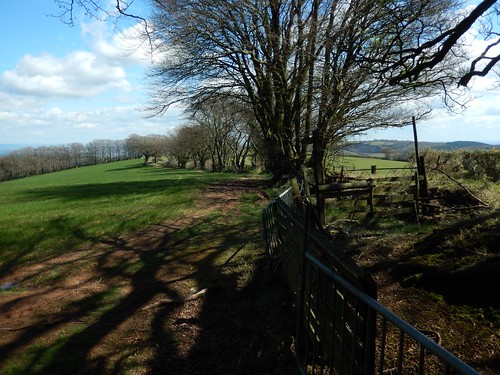 Here, the fingerpost appears to point towards the north-eastern corner of the field, while the right of way simply follows the right-hand boundary in a clear easterly direction. 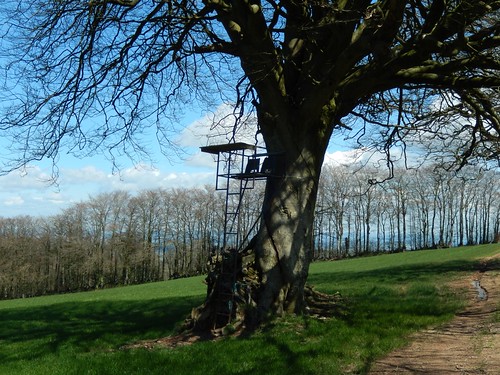 It was easy going so far and I knew it wouldn’t be long before I was heading downhill. But these two chairs, high up beneath the branches of one tree, took me by surprise.

A lookout post for the landowner and his wife? Or a very poor man’s tree house? 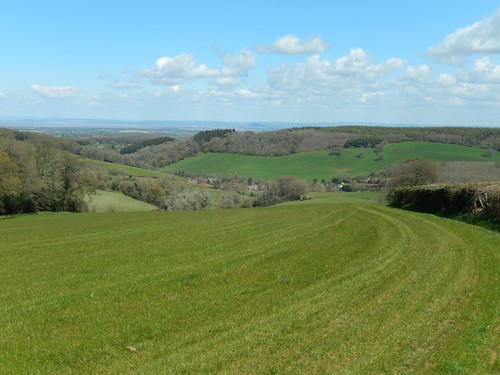 That worn path of the first field soon disintegrated as I stepped in to the next. But as the grass was no taller than the thickness of my soles, I was able to continue easily, looking right for a waymark that would lead me down towards the farm. 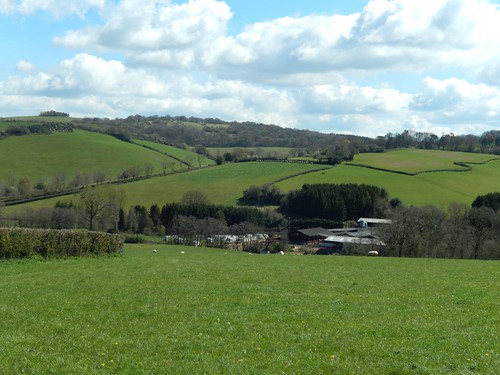 Although these hills look as though they could’ve been taken in one of many other parts of the country, there was something still pleasing about their display, even without the trig points and cairns that could be found behind me.

My first exit path was clearly unsigned and it wasn’t until I dropped down to the second option (which was waymarked) that I realised this. Huffing and puffing my way back up the hill, I sought to check it out but didn’t feel entirely comfortable about descending towards a space so close to the farm. There was that and the fact that two other walkers had also descended right past me. 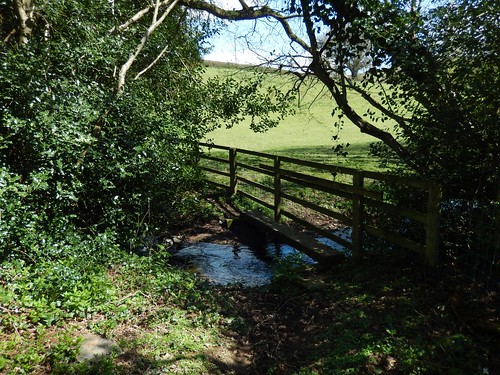 From the road, I had to venture in through the farmyard. Even with the waymarks and then finger posts in place, I found it to be as daunting an experience as ever. Not feeling at all confident, I headed towards and climbed a stile beside the first finger post I could see, which appeared to be heading straight down to Lambridge Farm… But I soon gathered that the fencing arrangement might’ve been different to what the OS map shows and followed the left-hand edge down to my intended stream crossing, avoiding a trip between further farm buildings with vocal cows.

Now, only a stone’s throw (albeit, vertically) from Broomfield Hill, we come to a point in Courtway at which I contemplated following on my previous walk here, one month earlier. 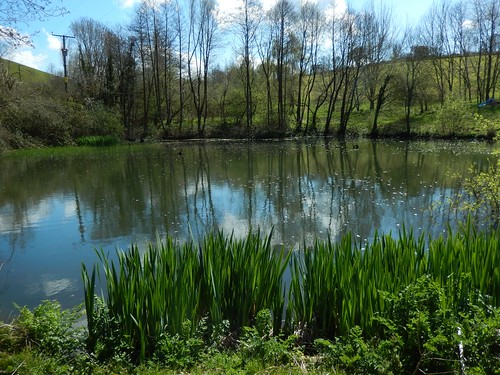 I’d spotted the Moat but hadn’t anticipated it would be quite so beautiful. Furthermore, the waymarking was clear and the paths, although slightly vegetated at times, were easy enough to follow. 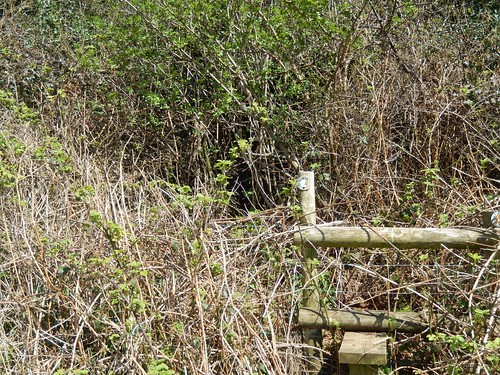 I began climbing in an easterly direction towards Tudball, unsure of precisely where I was on map, each time each time I reached a stile or gate. This route was growing steeper and I began to feel as though it might be too much, so close to the walk’s end.

There was one overgrown section (as you’ll see above) but this barely lasted even two-metres in length. So far, not so bad. 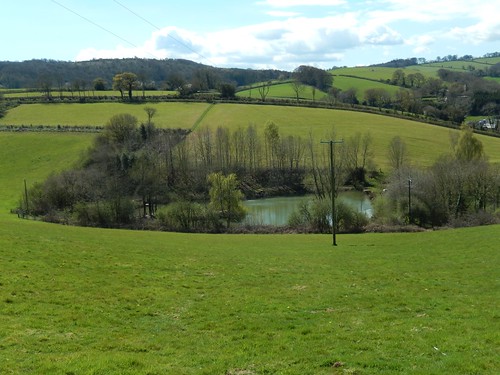 Looking behind me before I entered this mess, I could admire the fishing pond and moat, once again. I don’t think I’d ever seen a moat on an OS map before yet, I’ve walked round a number of ponds and watersources. I wonder why this space was so significant?

From the overgrowth, the waymark showed me to the top-right, which also married up with the markings on my map. Again, this bit was steep. Looking back, I could admire the way I had come. 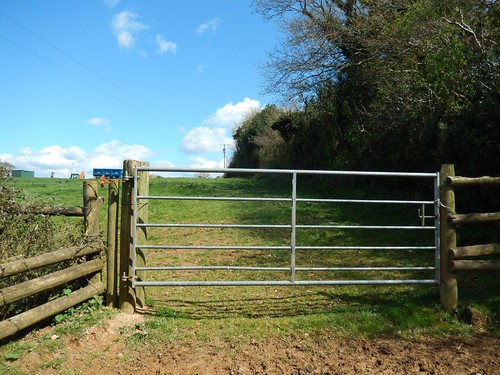 At the top of this field and still heading east, it looked as though I should pass through its boundary and keep left of the right-hand hedge… But the large gate ahead of me was secured with a padlock, chain and waymarking was absent. After a few minutes of hesitation, I hopped over and continued on, putting all my faith in the map I was holding… 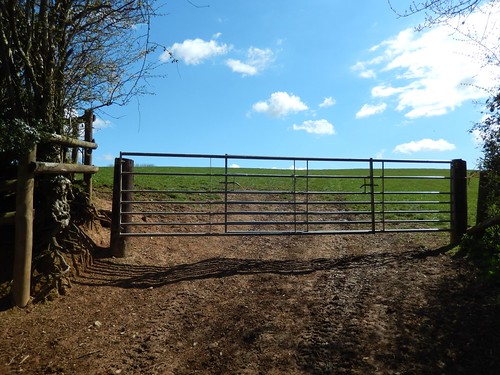 It bought me to a dead-end and I had to turn back. But, I had spotted a metal kissing gate through the other side of the hedge. Back-tracking to that earlier point, there was another un-openable obstruction to my right. I was just able to squeeze through that gap to the left and continue on to the road.

I had spotted an unmarked stile in the right-hand hedge, part-way up this hill. But without waymarking, it only looked destined for another faceful of brambles. I do regret not dropping down to investigate it more thoroughly because it didn’t tally up with my map either.

Also, I could add that the stile leading in to this field was dangerous, as the fence it was secured to leans a good 45º forward and back, each time you put weight on it… These are all issues I’ve reported through Somerset County Council’s clunky website. I’m not sure if I’ll hear anything back, which is a lot less than I could say for other local councils I’ve been in touch with recently. 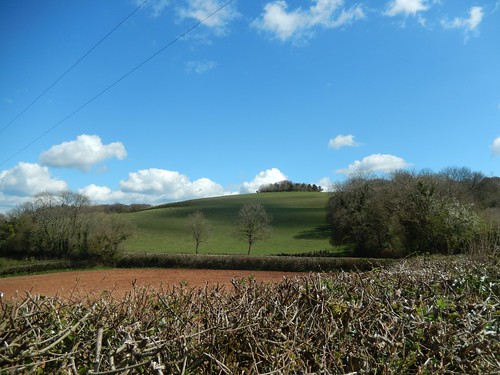 Although I didn’t recognise it was being clearly marked from ground level, there is an alternative path from the moat, heading south towards Manor Farm. I feel this requires investigation before I could consider leading anyone through what I’ve just explained. 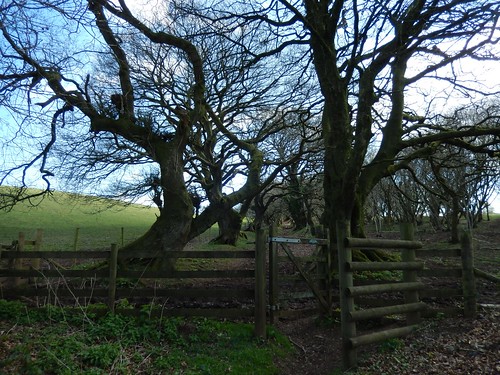 As soon as I reached the road, I really wasn’t far away from Broomfield Hill and a more familiar route. 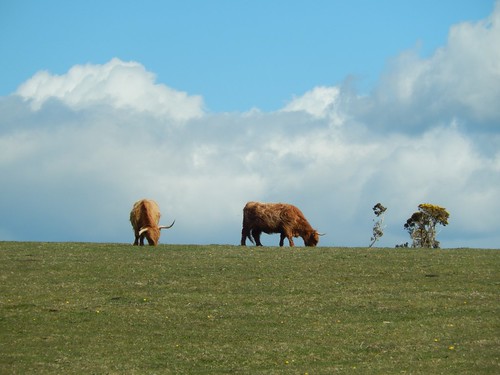 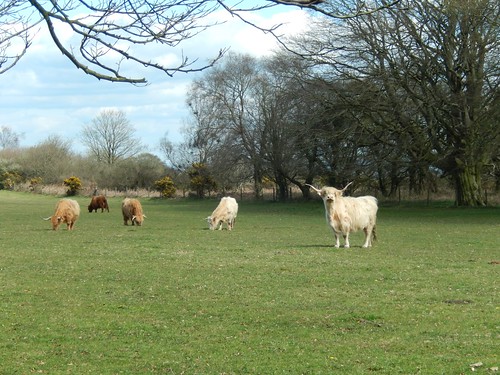 Highland Cattle were out in numbers, which makes this bit an essential step of any route passing by, in my opinion. 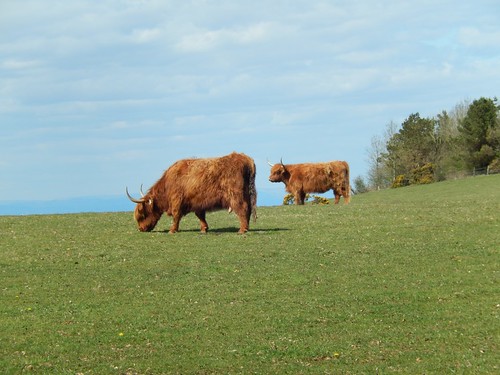 Heading south down the road and not far from my car now, I was hoping to find another way in to Fyne Court, seeing as how everything bar the ‘Quarryland’ is also marked as Access Land on the map. 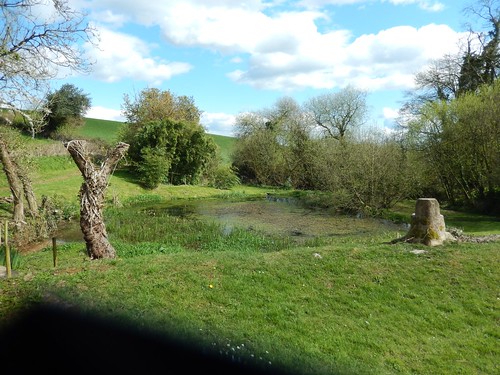 Just beyond Ducks’ Pool, I found an unlocked kissing gate and I wish now that I had tried to follow it, as I may’ve been able to joined a riverside path from the east, which would’ve returned me to Fyne Court through the more favourable and less-tarmacced ‘back door’. 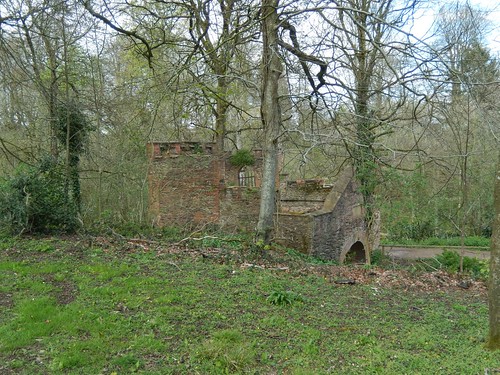 Instead, I climbed the road uphill, passing the Quarryland before spotting another unmarked gate to my left. Again, this field looked like Access Land and I could see people mulling around Fyne Court beyond the next fence.

I crossed this field, fully aware that there was some activity going on at the farm down to my right, only to find another padlocked gate… Well, I wasn’t going to turn around at this point as I swiftly hopped over, landing directly on to one of the marked trails around Fyne Court. 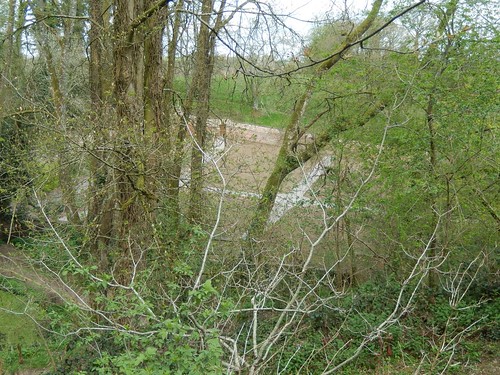 I think it was May 2014 when I first came here. At that time, the walled garden was heavily overgrown. I noticed, here, that efforts have since been made to clear it.

That morning, mine was the first car to arrive and I was soon joined by one other, as I set off on my walk. As I returned though, the car park was close to full!

So, it appears as though yet another pre-walk is on the cards. With my name down to lead this walk in about six-weeks’ time, I’m aware that I need to head down there again soon. I’d best get back to drawing over my map then! 😉

Total distance of this walk: 13 miles